We take a look at the new travel ban, what's changed, what hasn't and how it will affect meetings and events.

The latest iteration of the travel ban, signed by the president yesterday, removes Iraq from the ban and drops a provision that protected religious minorities. Other than this, the ban remains largely the same. Department of Homeland Security officials said the ban will be phased in over two weeks to avoid a chaotic same-day start. The Ban on Syrian refugees has been reduced to 120 days, requiring review and renewal, say officials.

Advice for Eventprofs and Meeting Planners

Earlier this month, we received an unofficial statement from someone close to the State Department which said, “those outside the seven [now six] countries should not have any issues provided their paperwork is all in order.”

Anyone seeking further advice should contact the consular officers at the US Embassy in their home country. They should be contactable by email or telephone. All US embassies have websites with the necessary contact information.

Will The New Travel Ban Kill Optimism in Meetings?

The most recent PCMA Convene Annual Meetings Market Survey indicates a general air of optimism for the meetings industry. Compared to the previous year, budgets, attendance and exhibitors were all up in 2016. Although this is positive, there is a clear slowing of growth when compared to the previous 10 years.

Given that this data was collected before the travel ban materialized, the slowing growth over 2016 is a worrying sign. With a slump in flight bookings and attendees demanding refunds from event organizers, next year’s results will probably look very different.

“Most of the Meetings Market Survey respondents completed the survey prior to the U.S. Presidential election last fall. Would some respondents have different expectations for their 2017 events if they were responding to the survey today instead of last year? If their events attract global attendees, the answer is probably yes. The Executive Order banning travelers from Muslim-majority countries from getting new visas — which President Trump revised today to include six countries — will definitely impact attendance at events this year that draw from those countries. There is also concern in the U.S. meetings industry that the Executive Order may lead to larger challenges with global-audience acquisition.” 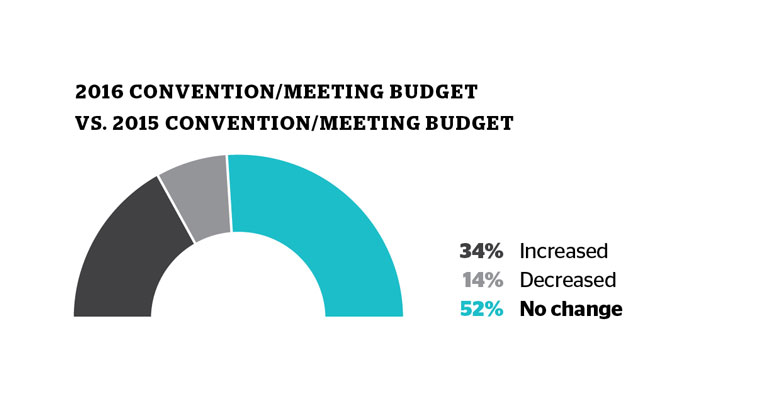 There is, however, hope for 2017. In the survey, which was collected during the run-up to the presidential election, 28% of industry professionals said they expect to plan more meetings during 2017. This indicates that despite uncertainty, the meetings industry remains confident.

Almost a fifth of respondents said that one or more of their attendees had trouble obtaining a visa in 2016. 58% say it was more difficult to obtain a visa than in the previous year. Considering the direct impact the travel ban will have in this area, some attendees will require more time and advance planning. Meeting organizers should recognise and be sympathetic to this need.

Only 43% of respondents, compared to 50% in the previous year, said that they will be holding meetings outside the US in the future. A significant but perhaps unsurprising drop. Canada is the most popular destination with 75% of respondents likely to consider planning a meeting there. Western Europe comes in at second with 47% and perhaps most surprisingly, the UK takes the third spot with 37%. The UK result may seem surprising given the Brexit vote back in June but a weak pound is an attractive prospect for international events.

Although the travel ban will have changed opinions considerably, there is still a lot we can learn from last year. There were clear signs of nervousness but confidence shone through and many expected to see a brighter 2017. The challenge for meeting organizers now is to stay confident and fend off adversity.