Events are stuck between a rock and a hard place: Many government assistance programs are set to expire, but events are nowhere near a real comeback. Eventprofs are taking to the streets demanding action and continued support.

With recent protests in the US, the UK, and Portugal, the events industry is gaining momentum in the push for more government support. It’s imperative that event planners raise awareness about the industry’s economic hardships, and many are rising to the challenge.

While some regions have begun to scale back their lockdown restrictions, many businesses see this stage of reopening as no more than a license to lose money: the reduced capacities required to maintain social distancing are simply not profitable.

In response, industry groups across the globe are working to raise awareness about the gravity of this situation. This article discusses some recent activations and provides tips on how you can join the cause.

Businesses across a wide variety of sectors have faced unprecedented losses, but the uniquely vulnerable position of the events industry is undeniable. According to a recent EventMB survey of global event planners, almost 20 percent of respondents were either laid off or furloughed as of June, and this figure is likely to rise without urgently needed support. 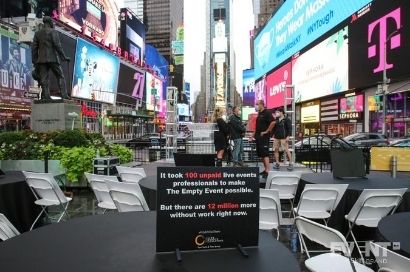 In a recent paper calling for government sponsored exhibition incentives, the European Exhibition Industry Alliance reported that exhibition organizers predict financial losses of 75 percent or more for 2020. A recent survey from the UK’s Meeting Industry Association (mia) indicates that 34 percent of the nation’s venues are already reporting losses of between £1,000,000 and £5,000,000 (roughly $1,300,000 and $6,600,000 USD). Further, mia estimates that an average of 38 percent of venue employees are expected to lose their jobs by the end of October, although this figure could be more than halved if the government decides to continue its soon-to-expire furlough scheme.

If left unchecked, these kinds of declines will have a major impact on the worldwide economy. The Events Industry Council’s 2018 Global Economic Significance of Business Events study found that business events alone accounted for $2.5 trillion (USD) in direct and indirect spending worldwide. The same study attributed 26 million jobs to the industry.

Code Red: How the Events Industry Rallies Against the Crisis It is not a coincidence that protest events across the world are using red light to symbolize their cause and solidarity. Just as many nations have used “red zones” and “red alerts” to signal outbreak hot spots, protests worldwide are using the color red to symbolize a financial state of emergency. And just as the pandemic has had far-reaching consequences, so too will failing to support such a vital sector of the world’s economy.

In the US, the Live Events Coalition (LEC) has so far staged 6 activations and held several rallies across major cities to raise awareness and gather signatures for the organization’s online petition, titled the Covid-19 Federal Aid Package for the Live Events Industry. Two of the most high-profile activations, one in New York’s Times Square and the other in Washington DC’s National Mall, were based on the concept of “Empty Events”: 48 empty tables were put on display, with each table representing 250,000 event industry workers who stand to see lifelong careers disappear over a period of months. That’s 12 million people. The eerily empty National Mall table display was bathed in red light once darkness fell.

Similarly, the #WeMakeEvents – RED ALERT Day of Action in the UK used red light to focus attention on both event venues and industry workers. Venues across the UK blanketed their exteriors in red light, and individual workers lined up along the Thames river flashing red lights from their phones. With the tight network of red flashes visible throughout aerial footage over London, RED ALERT provided a bold visual reminder of the industry’s expansive impact.

Incredible live aerial views of #wemakeevents are being broadcast live from our Facebook page. Thank you to everyone who has come out in support this evening – the turn out is incredible. We are sharing lots more on our stories. #WeMakeEvents #LetTheMusicPlay #LightItInRed #RishiSunak #OliverDowden #CarolineDinenage #SkyNews #BBCNews #festival #festivalseason #livemusic #livemusicrocks #liveevent #supportneeded #glastonbury #festivallove #gigs #livegig #liveeventssector #covid19

The Portuguese Association of Technical Services for Events (APSTE) staged a sister protest in Lisbon to coincide with the UK’s RED ALERT Day of Action. It featured event hands pushing roadie boxes — much like in Manchester’s RED ALERT protest march and Philadelphia’s LEC rally — and then lining them up in a grid configuration at the Terreiro do Paço town square, where they too were cloaked in red light come nightfall. Solidarity events were also held in Slovenia and the Netherlands, where 250 buildings were lit up in red on the night of August 11. Earlier in the month, the South African event industry held a similar “Code Red” event involving over 500 buildings.

And there is more to come. Further to the LEC activations and rallies, the RED ALERT movement is gaining momentum in the US. 1,500 venues in major cities across the US have pledged to cast a red light across their building exteriors on September 1, the same day their website will be going live.

The Rock and the Hard Place

Shortly after the UK’s RED ALERT protests, Prime Minister Boris Johnson announced loosened lockdown restrictions. Some see this as a sign that the government is listening, but  commentators on social media are pointing to the financial failure of a recent socially-distanced trial event in London to demonstrate that the lightened lockdown isn’t enough.

In fact, the combination of expiring government support and the suggestion that loosened restrictions herald a return to work puts many planners in the difficult position of having to make a go of a losing proposition: trying to run a business on events with a capacity that prohibits their financial viability. The loosened restrictions, they say, don’t offer any real recourse economically — to say nothing of the perception of risk surrounding live events.

While the events community’s reception of loosened lockdown measures in the UK has been mixed, when it comes to the official messaging of the awareness campaigns, the demands across nations are aligned. Rather than a reopening, they are calling for the prolongation and expansion of special furlough, unemployment insurance, and business assistance plans that were put in place during lockdown. Other requests include tax exemptions and training programs.

The Live Events Coalition is lobbying for the following changes:

Similarly, the upcoming #RedAlertRESTART event planned for September 1 is urging Congress to pass the RESTART Act (S.3814) and expand the PUA.

The UK’s RED ALERT has the following list of priorities:

The Portugese protest, despite its link to RED ALERT, has more in common with the Live Events Coalition in that it is prioritizing an extension of the government’s interest-free loan programs and unemployment assistance. Nevertheless, all three movements hinge on some form of government-backed financial relief, as do their counterparts in the Netherlands, Slovenia, and South Africa.

If 2020 has shown us anything, it’s that protesting works. These campaigns need to maintain their momentum.

It may be worth noting that an earlier June campaign in Germany, also involving the use of red light to highlight affected venues, was designed as a critique of government restrictions on live events. At the time the event was staged, the German government had already announced a €130 billion economic aid package ($154 billion USD) with €25 billion earmarked to help the hardest-hit SMEs survive the summer. This could be in part why the original red light campaign appears to have lost steam just as similar movements are gaining momentum in regions where events have less support.

It is worth noting that early advocacy efforts from UFI and other European event associations likely had an influence on German government decisions. If anything, the German example suggests that strategic lobbying can be effective.

There are glimmers of hope in other regions too. Toward the end of the Lisbon protest, organizers were asked to schedule a meeting with the country’s Secretary of State for Trade and Industry. It remains to be seen how the US campaigns might influence an updated federal stimulus package, but international precedents might help to set the stage.

To put the US situation in context, survey results from UFI’s Global Exhibition Barometer ranked North America (excluding Canada) the fourth lowest in public financial support for the exhibition industry among five international regions, just ahead of Africa/Middle East. The events industry contributes trillions in spending and supports millions of jobs. Its workers need support.

It is too early to tell what effect the recent protests will have on public policy, but that also means it’s important to keep pushing for more awareness. There is still time to influence the agenda.

Here are some steps that you can take:

Use resources like UFI and SISO’s This Show Will Open for Business campaign, as well as economically relevant information like the Event Industry Council’s Covid-19 Economic Impact Research and UFI’s Global Exhibition Barometer. 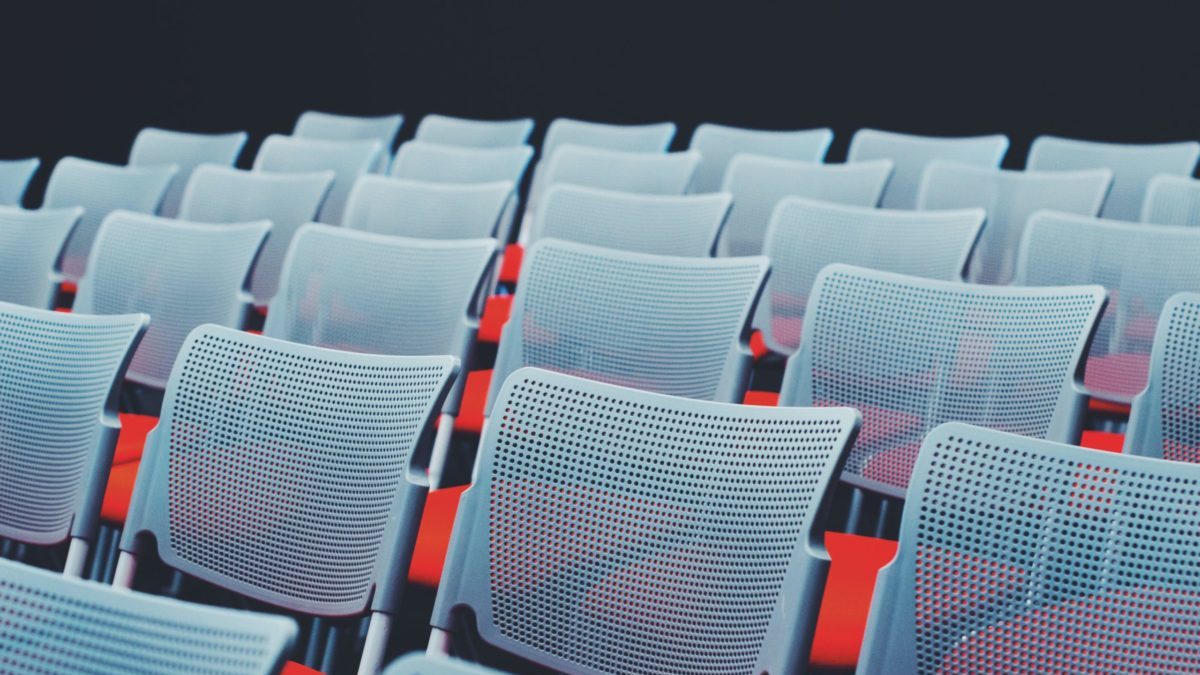