Eventtech never kept its promise to change events forever. Now that events are only happening online, we are witnessing a seismic market shake-up. What does the future look like?

Five years ago, Johnny Boufarhat had a severe reaction to a medication he was taking. It got so bad, he was forced to stay home for years, barely able to go outside. He quickly realized that he could pretty much do everything from home other than attend events.

This insight sparked the development of Hopin. Just a few years later, Hopin has closed a whopping $40M series A funding round.

In a sea of furloughs, layoffs, massive share drops, and companies going bankrupt there is a sector that is thriving from the crisis, and events are at the core of it.

But let’s take a step back.

While the past five years have arguably been the most successful for event technology companies, the market was showing symptoms of maturity: little innovation, lots of mergers and acquisitions.

The truth is that the frustration in founders and CEOs was visible. Structural problems like poor venue wifi combined with a general lack of interest in the technology on the part of planners kept event technology a tool for the minority.

Those planners who understood it were able to implement it with amazing results. The others would prefer a spreadsheet and mail-in checks to register attendees.

As a result of this generational split (tech-driven, not age-driven), companies competitively positioned with a solid end-to-end platform thrived. The rest began to suffer, throwing the ecosystem in an ephemeral illusion of progress.

Boufarhat spent two years before the crisis making his platform the best possible. His self-quarantining projected him into a scenario that, all of sudden, 1.6 billion people would experience at different levels around the world.

“There was a lot of thought process and 1.5 years of pre-development before going live,” the Hopin CEO added. Such a visionary approach put the company in a very advantageous position when the crisis hit.

A similar situation was experienced by Xiaoyin Qu, who dropped out of Stanford last year to create a virtual event platform, Run The World. The company recently closed a $15M round led by Andressen Horowitz, a firm whose portfolio includes Facebook, Slack, Lyft and Groupon among others.

“We created the company because of an experience my mom had attending an event in Chicago. My mom, a pediatric neurologist from China, went to a conference in Chicago and met another doctor from Dubai who shared the same rare patient case, which helped inspire her with her treatment plan. That was her first international conference in 35 years in medicine because it required weeks of overhead getting a visa and traveling. We want to democratize access to events and enable people worldwide to meet each other and form meaningful social relationships.”

The Flexible Made it Through

Vision certainly has been rewarded as these companies managed to be ready at the right time with the right product, but others also made it out of flexibility or necessity, changing forever the event technology landscape.

Where larger companies such as Eventbrite are showing the pains of being too large, medium and small-sized event technology providers reinvented their offering to reflect the complete lack of demand for live events.

This shift had two major effects on the market:

1. Those companies that were not able to offer a virtual product of sorts faced (and continue to face) incredibly tough times.

2. Those companies that pivoted to virtual are now part of a new event technology ecosystem.

The eventtech landscape we talked about in January does not exist anymore and, looking at what is currently happening in North America, will not resurface anytime soon. What does it look like?

Pierre Metrailler, CEO of Spotme, says that “It’s a noisy and ugly marketplace. Noisy, because there are so many people who are offering something related to virtual; ugly because every single part of the event tech stack is now doing virtual (reg, apps, content, etc) and effectively competing against each other with a ton of small players. I do anticipate a first wave of consolidation by the end of Q3.”

Demand is Dead for Live, Skyrocketing for Virtual

This marketplace shift is one that is defining a new wave of event technology. We anticipated this change in 2017 pinning to VR, AR and AI. A new ecosystem where event technology companies would build apps only in these verticals. Well it has happened, it is virtual even though it does not involve VR — the big loser of the virtual event revolution.

Demand died for live event technology. It skyrocketed for virtual. More than any company in this space has ever seen. More than they could ever cope with. 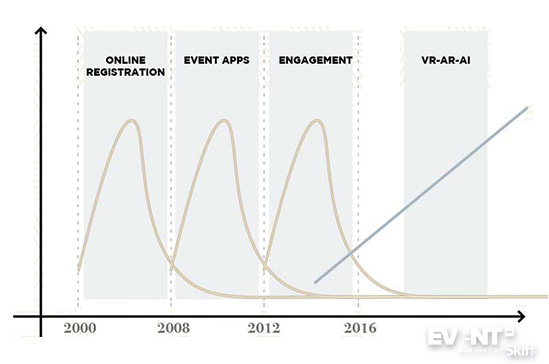 Metrailler added that they experienced 15 times the inbound demand compared to the first quarter of 2020.

Mike Piddock, founder of Glisser, shared that, “Initially, we saw three to four times the number of normal inbound enquiries to our business, but I think it’s fair to say a lot of that was planners really early in the buying cycle. It’s calmed down a bit now, and I’d say inquiries are back to a normal volume, but those coming in are now much further down the process.”

Yarkin Sakucoglu, CEO of Socio mentioned that the company “has seen the demand for virtual events increase so much that we’ve started hiring again. In June alone, we more than doubled our revenue from new clients, compared to pre-COVID months. The Socio platform has been powering virtual and hybrid events for years, so we were well-equipped to lead the change to fully virtual events and continue to anticipate the industry’s future needs.”

Jelmer van Ast, CEO and founder of Conference Compass, shared that “Inbound leads in May are three times that of May last year, and four times that of April this year. Our sales team is five times busier in Q2 compared to Q1. The number of demos with prospects is two to three times the usual average.”

Peter Komornik, CEO of Slido, saw some similar patterns: “We have definitely seen a surge in usage after a dip in March as people moved online. The overall usage of Slido almost doubled compared to pre-covid levels, with some use cases like all-hands meetings, Q&A sessions or Quizzes growing very strongly, while other use cases like conferences, trade shows, meetups, etc. are suffering.”

Matthew Donegan-Ryan, general manager of Swapcard for the US, described the rollercoaster of the past few months:

“During March and April, our clients were actively cancelling and postponing their live conferences and trade shows. We were contemplating layoffs, but thankfully we were able to continue operating without reducing headcount.

We’re fortunate to have made that choice because, by May, the interest in our Virtual Event platform erupted. In the month of June alone, we closed our annual sales goal of new business.”

Bob Vaez, founder and CEO of EventMobi, described what the new market looks like after closing the biggest sale in 10 years:

“The past 3 months have been a wild ride. It started with a 95% downturn in sales, forcing us to make cuts to stabilize the business. And now we’re thrilled to be back above our pre-Covid employee count and just had our biggest week of the last decade!

If we hypothesize a market of 2M events in the US alone, 70% of them are running on simple webinar tools such as Zoom and the other 30% need a more branded virtual event platform. But 30% of 2M is 600k events compared to maybe 200k events that needed a mobile event app at best pre-COVID. Even though almost all the tech platforms have started offering livestream solutions, the demand is three times what it was pre-Covid.”

In different capacities, companies that should have seen their revenues go to zero are experiencing growth — in some cases unprecedented growth.

In a market where event technology was at the very bottom of the priority list, where items such as food and beverage, room hire and AV were the big expenses, virtual event tech platforms have become the sole budget item for event planners.

Is that it? Are virtual events the only future ahead of us?

Not So Fast, Live Will Come Back

The new event technology landscape is strongly rooted in virtual. This is the only way possible right now. At some stage, though, things will go back to normal and live events will restart. They are actually restarting as I write.

The big question is what event technology will look like once events are back at full capacity. Needless to say it could take more than a year to go back to pre-Covid-19 levels.

The answer is that, no, virtual event platforms are not going anywhere. Yet they will need to evolve.

As the CDC and WHO explain, while the virus is still circulating, virtual events are the safest way to meet. Yes, some people will decide to attend in person but many will still prefer to attend online.

Hybrid events, or just events in their latest evolution, will have a stronger component of virtual interaction. There will be increased pressure on virtual event platforms to integrate with live experiences and vice versa.

This scenario will demand further development from the 100% virtual platforms but competitively position those companies that come from live events. Data integration and seamless online-offline communication will create a massive competitive advantage.

It is also fair to expect that many events will be slashed. Now that companies realize the benefits and effectiveness of virtual, live events could suffer. With due exceptions on both ends, of course.

While we like to think that things will go back to normal in the event industry, evidence suggests otherwise. Virtual event platforms harnessed more investor attention in four months than traditional event tech has in many years.

While virtual events may seem overhyped or like just a fad, the reality is that nobody knows for how long the coronavirus will keep hammering the event industry. In the meanwhile, virtual events remain the safest solution for many.

It seems that the crisis will last long enough to completely reshape the event technology landscape. Interesting times ahead.