Looking for a new space for your next event? Consider these cities that may not have made your list before.

Have you ever experienced the joy of finding an “unknown treasure”? That hidden beach or that secluded restaurant with amazing food, that become an instant favorite, not just because of how wonderful it is but because you seem to be one of the only ones who realizes it. There’s something to be said for discovery and because of that we’re bringing to you a list of cities that are ideal locations for events.

We selected them based on transportation, affordability, venue options, and best of all… their relative anonymity in the event planning business. Okay, so this city is hardly an unknown because it makes tons of “Best of” lists but it probably isn’t the first place you think about for an event.

“Keep Austin Weird” is a slogan you often hear in reference to the city but it’s not a bad thing. Austin is an incredibly unique pocket of Texas that doesn’t seem to conform to the expectations of the rest of the state. Maybe it’s the University influence or maybe it’s the government presence, but this town is unique and fun. It’s home to SXSW so it can accommodate a crowd.

Austin is a foodie’s and music lover’s dream all rolled into one. It is home to innovative meeting spaces and state-of-the art infrastructure. The one downside to Austin is it’s traffic because it’s population has grown faster than its roads can keep up. However, the traffic is nothing compared to other major American cities such as New York and Los Angeles. Utah has recently attracted a lot of tech business because of its welcoming startup climate. It was listed as #13 in Entrepreneur Magazine’s list of Best Places to Move if You Want to Start a Business. But it’s also a great spot for meetings and events. The International airport in Salt Lake is serviced by all major US airlines so attendees have options. Their light-rail system provides riders with quick, affordable access from the airport to the downtown. And once you’re downtown, there’s a “Free Fare Zone” so you can ride around downtown for free.

Salt Lake City has been consistently ranked by the Corporate Business Travel Index as one of the U.S.’s most affordable destinations. Columbus, Ohio is one of those towns that most people outside of the midwest don’t think about but it’s centrally located, inexpensive, served by an international airport and home to a number of large companies. It also consistently makes the list of best places to live and a town with solid job opportunities.

For event planners, it offers nearly 27,000 hotel rooms citywide. The downtown is walkable with a beautiful riverwalk area and a major entertainment district. It’s state-of-the-art convention center offers 426,000 square feet of exhibit space, 65 meeting rooms and two ballrooms. Best of all, the facility to located just a block or so away from the vibrant Arena District and the Short North Arts District, giving attendees plenty to do without the need for a car. Twenty years ago, this was not a town that interested anyone under retirement age but two decades has changed a lot in what used to be a sleepy, old-Florida town along the Gulf Coast. Today, it’s home to countless craft breweries, an MLB team, the Dali Museum, and interesting murals that decorate the local storefronts.

St. Pete, or the ‘Burg as it’s often called, is easily accessible from the Tampa International Airport and also has a regional airport of its own. There’s even ferry service that links St. Pete Beach with Tampa.

Downtown St. Pete has 25 hotels with about 3,000 rooms. However, planners will also enjoy the balmy breezes and options for additional rooms and meeting space on the beach in St. Pete Beach, Madeira Beach, Treasure Island, Redington Shores, and Clearwater Beach. This New England gem is easily reached by the award-winning T.F. Green Airport in Warwick. Guests can take the light rail from the airport to Providence. Providence is also less than a two-hour drive from Boston. It’s less than an hour’s drive from the summertime playground of the U.S.’s early kings of industry in Newport. There are 5,500 rooms in the Greater Providence area.

Providence is home to a thriving art and dining scene. Readers of Travel + Leisure Magazine voted it among the best in the U.S. in the “America’s Favorite City” poll. For the time being, Cuba is open again to Americans. (Although you probably want to take a look at the new regulations.) It’s not the ease in getting there or its affordability that gives Cuba its place on the list. It’s intrigue.

Hosting an event there may draw crowds of American attendees simply for the novelty. Havana is a gorgeous vibrant city. It’s rich in history and many of the locals are excited about the opportunities in increased tourism with the U.S. They’ve even opened their homes as B&Bs.

However, while hosting an event there is sure to drive a curious crowd, it is important to understand the risks involved. Even the luxury hotels there may not be on par with what most US attendees would expect and the current presidential administration recently changed visitation regulations. Still, the cultural opportunities and excitement in being able to host an event in a city that has been off-limits to most Americans for over half a century does have some mystical allure. 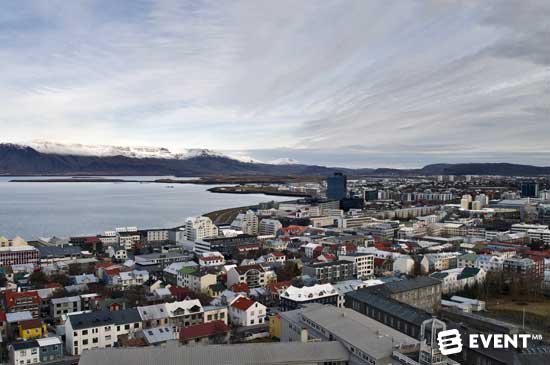 Several years ago, Iceland launched an incredibly successful visitors campaign to lure more people to this beguiling country. They boasted of its convenient location between the US and Europe. They even offered free layovers to entice people to stop and stop they did. Now it’s a popular tourist destination, but it’s also a fun place for a meeting.

From hanging out with puffins to taking the waters, your attendees will find plenty to get excited about. There are several venues that can host up to 2,500 people including the Harpa Conference Center.

Travelling to Iceland is easier than one might imagine. They have frequent daily flights to and from Europe and North America. There are 25 airlines that service Reykjavik connecting 80 destinations in 69 countries in the summer. This suggestion comes with mixed sentiment much like Cuba. Yes, there is the threat of unrest and terrorism but the number of visitors traveling to Turkey is rapidly increasing. It is a highly sought-after travel destination. All event planners know that when you host an event in a place people have wanted to visit anyway, you score big on attendance.

Istanbul is one of the fastest-growing travel destinations in the world and it continues to increase its airport capacity and number of flight connections. Though the airport still suffers on ranking well for on-time departures. Beauty and climate are two of the most popular reasons people visit this capital city but it’s also a wonderful event spot as well. It is a favorite among architecture lovers because it features beautiful examples of historic buildings and modern architectural gems.

The downtown can be reached easily from the airport on public transportation. Lisbon is also home to several historic MICE venues as well as modern convention centers. The airport offers direct flights to some U.S. cities in season. Like Istanbul, Seoul is also a top travel destination. According to MarketWatch, it was fourth in tourism spending outside of Paris, London, and New York at 15.2 billion in 2015. The Seoul airport enjoys a competitive on-time departure rate for flights at 78%. It’s a major Asian and transcontinental hub.

Another thing that makes Seoul a good option is its number of unique venues, everything from private, traditional homes suited for small meetings to large scale, state-of-the-art convention centers. The Korea MICE Bureau (convention bureau) can help you with your planning every step of the way.

Are you tired of the same old locations for meetings? The world is a big place. Get out and explore. These cities might not be the first ones you think of for your next event but they each offer a unique experience.

Which hidden gems would you add to the list?

How Wikipedia Revolutionized Destination Selection for their Annual Event

10 Meeting Destinations Where You Event Budget is Worth More

Plan an Event in These Destinations Before They Disappear

10 Great Venues in Europe for Events with 1k+ Attendees