Think concerts are all the same from a hosting standpoint? Coachella Music and Arts Festival sets the bar high. Here’s how it’s redefining the concert space.

The Coachella Music and Arts Festival is an annual celebration of all kinds of music, from established artists to reuniting bands, and brand new acts as well as art installations and sculptures. It’s held at the Empire Polo Club in Indio, California and has its roots in 1993 when Pearl Jam performed there because the Club was a venue that was not affiliated with Ticketmaster, which they were boycotting at the time due to extremely high ticket costs. But Coachella didn’t officially become the festival it is today until the late ‘90s. In 2003, the organizers of Coachella began allowing camping and the event became more of a festival. In recent years, celebrities like Kendall Jenner have brought mainstream media attention to the festival and it’s been branded as a playground for the young and wealthy.

Coachella is one of the largest, most lucrative music festivals in the U.S. drawing in a record-breaking $84 million in 2016. But the organizers of the festival, which now encompasses two consecutive weekends in April, are looking to be more than a high-end, musical Burning Man. They are redefining concerts and here’s how they’re doing it. 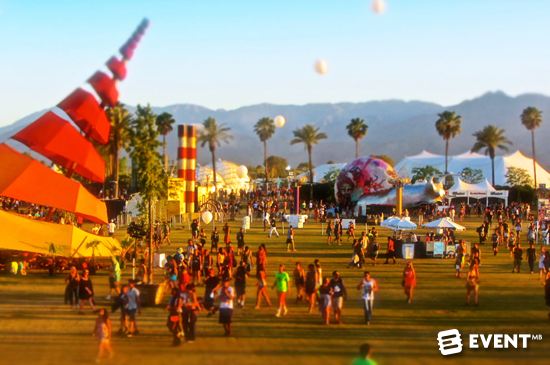 It’s not a surprise that this multi-million dollar festival sells out each year. What is amazing is that tickets go on sale before the lineup is announced. The Coachella brand is so established and desired that people are willing to buy tickets that range between $375—$899 before they even know who they’re going to see. In 2014 and 2015, tickets sold out in less than 20 minutes. High-end tickets also went up $100 from 2015 to 2016. Coachella founder Paul Tollett understands that this is a lot of faith that fans put in the brand and he says, “we have to make sure we come through for people with a good time.”

Coachella organizers are always looking for ways to amaze the crowds making the performers almost secondary to the stage and technology employed. In 2012, they used an 80-foot-tall, 140-foot wide cube of lights to “interact” with the audience with its own lights and movement that mirrored theirs. Matt Clark, who designed the installation, described it saying, “It transforms and changes shape in order to really create a personality for itself, but it also functions as a regular stage for the artists…. It acts as a dynamic canvas for the acts.” The stage became a part of the show just as if it was one of the artists. It also provided that “wow” moment people have come to expect from Coachella.

Even though it’s in the desert, this is not a bucolic music festival akin to Woodstock. The organizers want to be pushing the envelope of innovation and providing its guests with an experience they’ve never had. Music festivals and concerts are usually about acoustics and sneaking in to see a real moment with your favorite performer. But today with social media, that sort of idea of rock stars as untouchable has faded with their tweets. Stars still have a large following but there’s less distance between them and their audiences. They are no longer rarely seen wizards. So in order to recapture the amazement behind seeing these shows, Coachella has taken an auditory experience and played up the visual aspects in new and surprising ways each year. No ordinary lighting here. The festival organizers have looked for ways to “take the visitor on an emotional journey fuelled by light and music.”

The lighting technicians could easily design similar sets and shows for each of the acts, but they don’t. Instead, they’ve worked with several of the acts to craft (yes, craft) a lighting experience that fits the music and the tone as well as the experience they want for their audience. So instead of it being a parade of acts one after another, each is a theatrical event of monumental surprise and a unique experience aimed at making an impression.

Coachella is about more than music and lighting. Whereas Woodstock may have been a place to take things off, Coachella is definitely focused on what’s being worn. The styles worn there often set the stage for the summer fashion season (don’t tell Paris or New York). Gone are the days of ratty concert t-shirts. The paths at Coachella mirror fashion runways during Fashion Week. The phrase, “there’s something in it for everyone” fits Coachella to a tee. It constantly surprises with its lineup, in years past mixing groups like AC/DC and Madonna. The 2017 lineup was just announced and among expected headliners like Beyonce, attendees will also get to see Hans Zimmer, the German composer of scores of movies like The Lion King and Inception. Surprising acts keep Coachella fresh and attendees guessing since they have their tickets by the time the lineup comes out.

While many concert organizers might think of shopping their success around and finding a new location, Coachella has purchased adjacent property and committed to hosting the festival in Indio through 2030. They see the location as a big part of the festival itself. As described earlier, Coachella is a music and art festival. But this is not your parents’ “art.” Much of it is comprised of interactive installations with a focus on complex technology-driven pieces. Each year, the organizers look to outdo themselves in this area. In the past, the organizers rented pieces from Burning Man but then decided they didn’t want cast-offs and things that had been done before. They began commissioning their own pieces in 2010. They now give artists access to the festival grounds ten days before the concerts begin to create/install their works bringing an energy to the grounds that is palpable.

There is no one way that Coachella is redefining concerts because they are consistently redefining themselves and pushing the concert-going experience. Is it a fashion show set to music? Is it expensive tech art installations? Is it an excuse to blow a lot of money? Yes. But just when you begin to try and define it, Coachella defies the boundaries of definition through constant innovation.