Jump into the bizarre and see what crazy events are going on around the world. Whether it is tradition, culture, fun or revelry, we kid you not, these curious events are real!

Events are a great way to celebrate life and create unforgettable memories and experiences. While these crazy global events may seem fun and wacky, many have deep rooted histories and the traditions are very much a part of the culture and heritage of the destination. Niche global events can have a massive impact in terms of tourism. They can also be an attractive sponsorship proposition.

Here are some of the weirdest and most wonderful events from around the world with hundreds (or thousands) of participants that keep coming back for more! Hosted this year in Finland, these championships, as you expect, involve applicants air guitaring their way to try and win. They are not only entertaining but also receive a wide array of coverage that has even led to many national events leading up to the main event. Attendees from around the globe join with an audience of 5,000- 7,000 attendees and many more online viewers watch the outcome. Entry to the finals is free.

Considered to be one of the hardest foot races in the world, the Barkley Marathons are considered one of the most gruelling (and unique) 100 mile ultramarathons. Only 14 people have ever completed the race and some years there are no finishers at all, due to the harsh terrain and changing routes each year. At the Haro Wine Festival in Northern Spain they host a “battle of wine” (Battala del Vino) which involves a procession of people carrying containers of red wine through the town to the cliffs, led by the mayor to mass. After which everyone soaks each other completely with the wine they transported and then return to the town at noon for celebrations and festivities.

A traditional English competition held annually in Cumbria, involves a bizarre challenge of “gurning” which involves making the strangest, ugliest or funniest face while putting a horse collar over their heads! This ice festival showcases some of the best sculptures, exhibitions and snow and ice tours with illuminated displays each year. Massive buildings and sculptures entirely of ice are showcased and involved three theme parks this year.

Held annually in Nebraska, this free, 3 day event involves everything chicken themed and has the “world’s largest chicken dance”, chicken eating contests, cement chicken auction, parades, chicken flying contest and a national “cluck-off” in order to find the person who can best imitate a chicken. With attendees wearing minimal clothing, usually a traditional fundoshi loincloth, this men-only event is celebrated each year in the hope to gain luck in fertility, prosperity and a good harvest blessing. It has attracted over 9,000 participants in the past and has competitions for all ages, as well as musical performances and food vendors.

A festival with an array of cultural and art displays combined with local delicacies and fresh seafood. The most famous part of this event is the tuna toss. Over 40,000 attendees visit this four-day long festival, in part to see the fish throwing event which involves men and women competing to throw plastic tuna weighing 8-10kg the furthest, moving onto real frozen tuna in the finals. 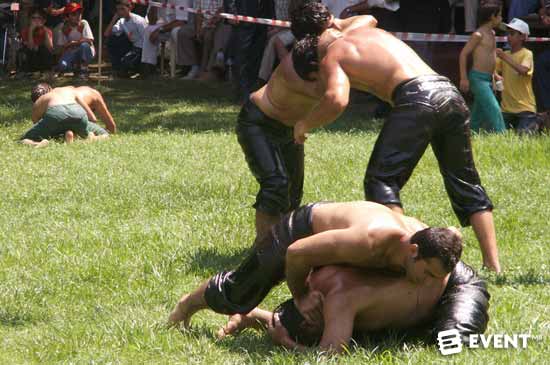 Taking place in open fields, attendees and competitors compete by lathering themselves in olive oil and then wrestling each other either to the ground or above their shoulders in order to score a victory. This long standing, annual event has become a tradition and attracts worldwide spectators.

In Lopburi Province in Thailand, an annual festival is held to feed the 2,000 strong monkey population with fruits and vegetables while also being a popular sight for tourists and animal lovers alike. The festival itself if often held at the Pra Prang Sam Yot Temple and the food is piled high outside. This tomato throwing festival is a giant food festival and is bound to appeal to any big kid attendees looking for some fun. Held annually in Spain, near to Valencia, over 100 tonnes of tomatoes are thrown from thousands of global attendees.

Set in the fictional Star Wars set of Tatooine in Ong Jemel, Tunisia, this combination of electronic dance festival and sci-fi seems to attract a large crowd, many of which don light sabres and Star Wars themed cosplay. This, combined with the sand dunes and desert, provide an interesting and crazy combination. This self-explanatory annual festival in Gloucester, simply involves participants chasing a wheel of cheese down a steep hill. However, the uneven surface, conditions (even in June), combined with the downhill momentum usually ends in a race to the finish rather than the cheese. It is fun to watch the falls and tumbles that proceed, as well as some of the costumes that participants wear.

A four-day fishing festival that involves traditional fishing methods dating back to 1934 in Kebbi, Nigeria. It is designed to not only fish but create unity and on the fourth day of the festival, men compete to catch the largest fish in under an hour, many of which will only use their hands, in order to win a cash prize. An annual festival, popular with international attendees, that hosts an array of activities from a photo exhibition, mud wrestling and local music conferences to mud obstacle courses, games, mud baths and massages. The festival is based on the benefits and healing of Boryeong’s mud, which has been used in many products around the world, thanks to its mineral rich properties.

The story goes that at a time of severe drought two men paraded the streets in women’s clothes to cheer up their wives and children. This grew into a traditional festival in the town of Minalin, in the Philippines, which to this day sees local men dress in women’s clothes and parade in the street and then on intricate parade floats. Although there are no written rules for the event it is seen that those who are considered the ugliest cross-dressers and receive the most laughter are crowned the queen of the festival. Many men dress up in intricate gowns, tiaras and makeup.

“Aguman Sanduk” means “the fellowship of the ladle,” a symbol of bountiful food. It signifies  finally conquering the drought, and ushering in a new year of plentiful harvests for the town. Held in Jaipur every year this festival is essentially an elephant catwalk combining with the Holi spring festival (Hindu festival of colours). It involves showcasing groomed and dressed up elephants. As well as the catwalk procession, there are also races and elephant polo to truly celebrate as well as plenty of finery, gold, paint and glitter for the riders and the elephants themselves

This combination event has an array to offer for those who want to experience the legend of bigfoot and hear tales of sightings. The festival itself is an homage to bigfoot with fun activities including helicopter and pony rides in Oklahoma each year. While the festival is free, those who wish to attend the two day conference lectures have to pay for ticket extras. Sailing a course on Darwin Harbour in order to find a hidden object and be crowned the winner is a challenge in itself, however, this event requires you to make boats out of only beer cans and sail them without being allowed to test their “seaworthiness” beforehand. They also have a junior event involving soft drink bottles for the younger participants.

A favourite for tourists and locals alike, this annual festival is like a giant colour run, minus the run! It is held to mark the start of Lent and involves tossing coloured flour in a large flour fight. Traditionally it was to rebel against forbidden carnivals but has evolved into a fun event that uses over one and a half tonnes of flour each year. Yes you read that correctly, in August each year, hundreds of global competitors aim to set the fastest time for snorkelling two lengths of a shallow bog. Spectators watch as both juniors and adults take part in the festivities in several categories, including the over 50’s, and some even opt to take part in fancy dress.

For wool handlers, wool-pressers and sheep shearers alike, this prestigious 3-day festival in New Zealand is the event of the year. There are competitions in various categories from novice to senior and it boasts a stadium crowd and over 70,000 global viewers from the live broadcast.

No matter what the continent, there seems to be a crazy event going on somewhere and while some of these are all about fun and games, others require true talent and training to participate. One thing is for sure – if you attend any of these crazy global events you are not likely to forget it in a hurry!

Have you attended or organized any crazy or peculiar events? We would love to hear details via the comments below.