In the latest episode of the Event Manager Podcast we are joined by Joe Schwinger, Chief Product / Innovation Officer of MeetingPlay + Aventri + Eventcore to discuss the importance of being able to embrace change and pivot.

Joe’s first foray in the events industry was via a role within Marriott, specifically its e-commerce department, over 20 years ago. During his time with the company, he joined a task force called “The Future of Meetings,” as the business was beginning to increase its focus and attention on the meetings and events space. It was during this time, he began working on mobile apps. Eventually he left Marriott to start his own gamification attendee mobile app, which we now know as MeetingPlay.

Since its launch, MeetingPlay has continued to grow. Over the past ten years, it has become a bespoke event technology company, and in January 2022 merged with Aventri before acquiring Eventcore in June 2022. MeetingPlay was already working within the virtual event space before Covid hit, and thus was able to pivot when the world of meetings and events became fully virtual during the pandemic.

Schwinger had an affinity for having all his team under one roof. Covid made that impossible. He now embraces being fully remote and appreciates the opportunities that virtual and online platforms offer with regard to collaboration and workflows. The team has grown from around 35 people in Maryland pre-pandemic to over 400 globally. In fact, Schwinger notes that, even with a fully dispersed team, their productivity is thriving and they all work together in a very collaborative manner, however he does add that there are instances where meeting in person is valuable for different teams.

We are all having various discussions as to whether our events should be entirely in-person, virtual or hybrid. Companies are also discussing whether to send employees to in-person events, with Schwinger noting that many people haven’t traveled for over two years, therefore there is some appeal to attending live. However, having recently attended a corporate conference, Schwinger noted that of those in attendance, 90% were planning hybrid or virtual events for the next 6-12 months, which he found surprising. From this, he believed that we’re getting to a point of a funnel approach, i.e. at the top there will be hybrid events and towards the bottom will be those that require face-to-face attendance.

With regards to events themselves, Schwinger believes that content is what will take an event from simply good to one which is great. As many others have noted recently, there was a period where keynote speakers were often big names within the entertainment industry, which were used as a draw for the event. However, they often didn’t have a connection with the event or the topics being discussed, with Schwinger noting that event planners realized that keynote speakers with relevance to the discussions taking place have greater success and provide greater value for the audience. The networking and engagement opportunities available to attendees are also an important element, which can bring your event from good to great, with Schwinger adding that by offering a bespoke service to their clients, the audience satisfaction increases as they are being able to enjoy an experience which is different from others which they have been a part of. This idea of being part of a sea of different as opposed to being part of the sea of sameness is one which Schwinger has been embracing since his days at Marriott.

Schwinger feels that the mobile tech space is currently going through a renaissance, noting that we are now in a period where we can leverage everything we have been able to do with mobile technology in the past and pair this with the recent advancements in Artificial Intelligence (AI). Schwinger goes on to discuss some examples of this, for both large and small scale meetings, why these developments are important and the benefits for the attendee and for the event planner.

Schwinger also touches on where he doesn’t see the meetings and events industry going in the near future, with the Metaverse and Virtual Reality (VR), being the areas of discussion. Schwinger notes that the industry is rapidly evolving, and whilst these areas may be part of the longer term future, he doesn’t believe that, in the current environment, they will stick. He believes that it will require these environments to become mainstream, then they too will be a focus of the events and meetings space, but the former must proceed the latter for it to work. However, he believes that where we will see more innovation is in Augmented Reality (AR) within the mobile space.

As always, we discuss so much more than outlined above, so head to your favorite podcast app to listen in full now. Whilst there, why not subscribe and never miss an episode!

Fashion, Food and the Secrets of Building Personal Connections

Sofia Crokos discusses her love of fashion, food and the value of building personal connections. 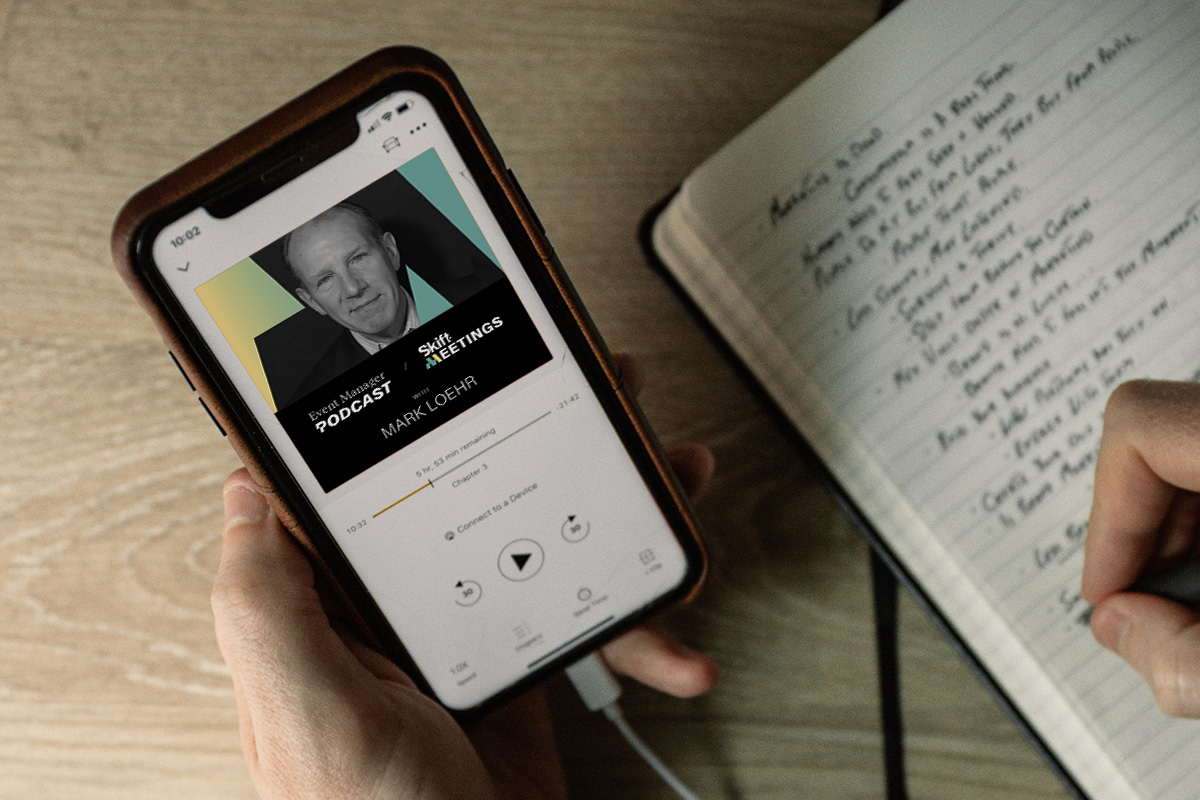 In this episode we are joined by Gerrit Heijkoop,Executive Partner / Moderator & Host at LiveOnlineEvents, where together we deep dive into the hybrid events, from both a production perspective and an audience perspective. This special episode features two sessions recorded live at the Skift Meetings Event Design Summit. In this episode you will hear from Jesse Gainer of C2 International, Megan Henshall of Google, Naomi Clare Crellin of Storycraft Lab and Liz Lathan of The Community Factory. The Evolution of Virtual Events