This is a case study sponsored by Zenus. More information about Event Manager Blog’s case studies.

The International Corporate Event Awards, known as the ICE Awards, exclusively recognizes in-house corporate event teams and departments. The 2017 event was held on 6th July at the Saatchi Gallery in London and brought together global corporations and national organizations to the winners’ rostrum.

The ICE Awards launched in 2015 and the 2017 awards attracted over 75 entries, evaluated by 28 judges – senior events professionals from a wide range of industry disciplines. 250 guests attended the awards evening. 70% were in-house event organizers, representing 60 companies, across 15 industry sectors.

In recognition of their hard work, the award sponsors and partners wanted to ensure that the corporate event planners present could sit back and enjoy being a guest for a change. The ICE Awards are deliberately designed to focus on informal networking at an impactful venue, with lots of time to network.

Founder and producer Anita Howard said: “Now in our third year the ICE Awards have proved conclusively the quality of work being delivered by in-house event teams, who are often overlooked within their own organisations and perceived to play a back-room role. We hope the ICE Awards will help them receive the recognition they deserve.” The organizers of the ICE Awards were keen to look after their guests right from the very first moment. The venue presented challenges as the entrance was narrow and the organizer wanted to provide attendees with badges. This combination was expected to make check-in slow and create long lines. Moreover, security is an important component of corporate events and the client wanted to make sure that only registered attendees would be allowed into the event. The Zenus API integrates into existing event management platforms, so that the event planner doesn’t have to switch providers or migrate any data. The ICE Awards used the Ya-Ya Regie online event registration platform. RegieFACE is integrated with Zenus facial recognition capability. Attendees can register before the event using their social media profiles. Alternatively, they can upload a picture of their choosing or take a selfie with their own device.

On the day of the event, the organizer sets up a tablet or smartphone facing the crowd, running the facial recognition program and connected to WiFi, as it is a cloud-based service. The attendees are automatically identified using live video when they stand in front of the camera. If a match is found they are authorized for access into the event. The face recognition works with any tablet or smartphone device, which can reduce hire and installation costs.

No personal data is ever transferred to Zenus. The registration platform anonymizes the images and sends them to a cloud-based service. The de-identified images are processed and instantly deleted. Metadata is also discarded after the event.

Facial recognition technology is being implemented by corporate planners, exhibition organizers, associations and professional conference planners, who need speed of check-in and greater security checks. Facial recognition technology is not meant to eradicate the human factor but it can enhance existing processes by improving efficiency, identification and convenience. How Were the Objectives Achieved?

Originally the client was planning to have two check-in facilities on giant screens at the event. However, due to major traffic congestion outside the venue the giant screen supplier was late for a short build up period. Even though the supplier missed the limited two-hour set up window, the client was able to set up the system on the devices they already had available and used one Mac Computer as the primary point for facial recognition so that everything was ready in time. The client was relieved about the quick set up of an emergency laptop, instead of worrying about the absence of the big screen supplier. Having a system that can work on different devices meant that it was easy to move to a plan B.

The biggest success the organizers noticed though was the speed of the queue – it was five times quicker than the barcode or QR code checking systems used previously. The narrow entrance caused no issues as queues didn’t have time to build up.

The technology impressed the attendees and the fast check-in helped them to enter the event in a positive mindset. Specifically, they enjoyed testing the robustness of the system and were surprised when it recognized them even when they were making funny faces and trying to confuse it. In some cases, attendees were taking pictures of other people using the system to check-in and engaged in conversations with other event professionals, which acted as an icebreaker and talking point.

Anita Howard added “It’s been an amazing privilege to gather so many in-house event planners under one roof. They’ve clearly enjoyed engaging with each other and relaxing at an event they haven’t had to organise themselves! The atmosphere has been phenomenal.”

A record number of inquiries were received from event planners in the seven days following the ICE Awards. Some guests were concerned about how their face and data would be stored. Even though the images are anonymized and deleted, this was not communicated enough to attendees before the event to put their minds at rest. Nevertheless, more than a third of the attendees opted-in which significantly decongested the check-in. Explaining how seriously data security is taken ahead of the event will encourage a greater number of delegates to opt in.

A challenge of using facial recognition is that some people will never give permission for it, even if the data security measures are well communicated in advance. However, the organizer can still use the traditional barcode/QR code check-in or search by name within the same platform. If a good number of attendees do opt in to the facial recognition it will still have a significant effect on queue times.

Face recognition can speed up check-in time over other methods, even barcode and QR scanning. It could be an ideal solution for larger, busy and time-pressurized events, for instance, events with a short registration period and also venues with logistical challenges, such as small registration areas.

4. WiFi and Back Up Plans

Access to WiFi is important; the organizer should have their own internet access point for the facial recognition system to work smoothly. Having spare tablets or laptops available is recommended to give you a back up plan and enable you to quickly set up or swap devices if necessary, as happened with the ICE Awards.

As the ICE Awards demonstrated, facial recognition can be a fast and security-focused check in solution. This cutting edge technology is something that we can expect to implement into more events as it can be a cost-effective option to effectively process large numbers of attendees. Nick Borelli, an event technologist and educator, has been working in the tech space since he was 14. Over the years Borelli’s tech and hospitality experiences continued to merge as he worked in freelance web design for the bridal market. This led to him recognizing the overlap between the online and in-person event spaces in regards […] 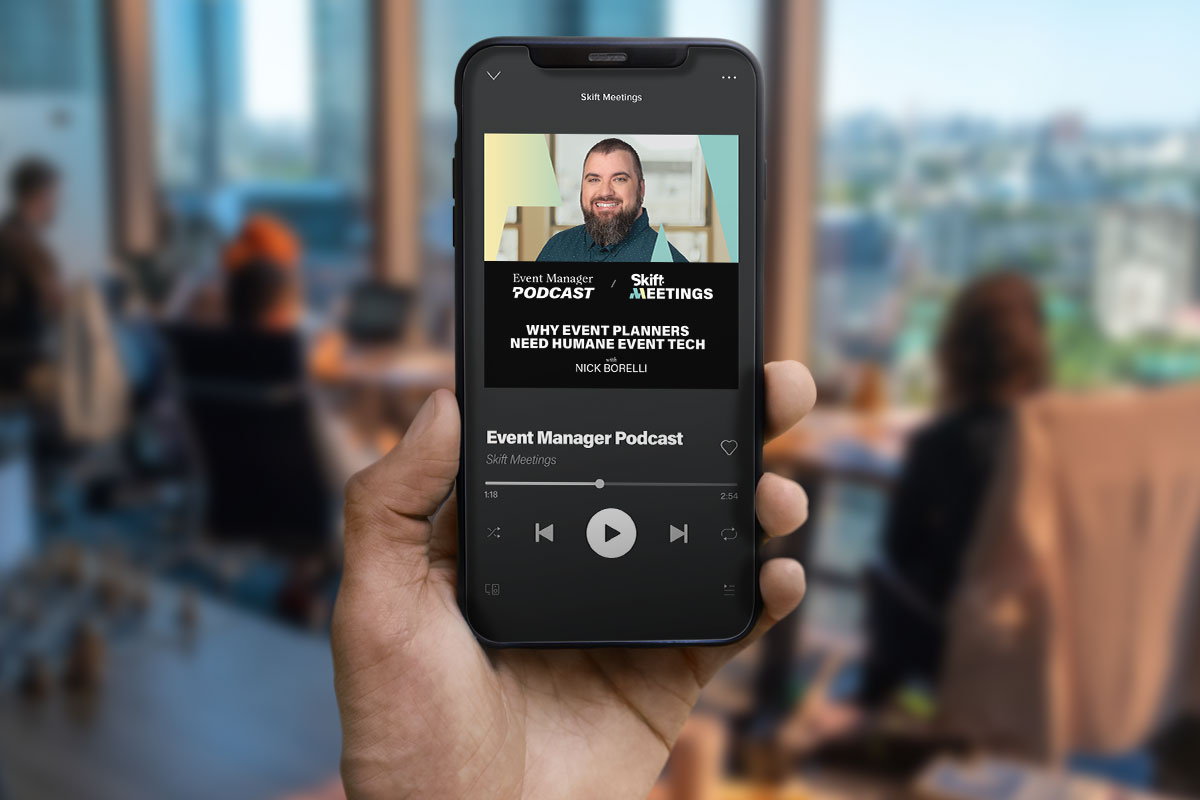