Based on interviews with the major principals involved down at Moscone Center last week, here are some of the elements to keep in mind as you consider doing one of your own: Like all good marketing, you need to start with what you’re looking to achieve from the program. In the case of MacWorld they sought to demonstrate cool new Apple technology and engage their audience in a fun and interesting way.

In the words of Paul Kent, Macworld’s VP/GM

“This ‘Sandbox environment’ is a lot of what this show is about—how do we get this technology tested, in meaningful implementations that people can enjoy and benefit from, and the scavenger hunt hits that on all the marks.”

Many people use scavenger hunts to activate the exhibit hall floor and get attendees to seek out all corners of the space. While MacWorld put one of its stations towards the back of the hall, they didn’t generally make this a priority, but one certainly could. 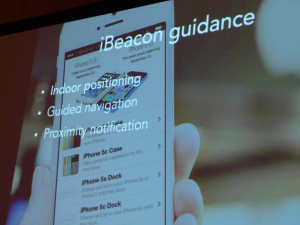 Slide from great MacWorld talk by Rene Ritchie of iMore.

We’re talking in this post about how iBeacons can enable scavenger hunts, but it’s important to remember that the world of proximity based marketing includes more than just iBeacons. Geofencing, QR codes, augmented reality and protocols like GPS and Wi-Fi or other new location based technologies may play a part in your solutions going forward.

iBeacons are not themselves all that smart, so at the heart of any program like this is the mobile app that will respond in various ways to the iBeacon signals. That is where all the action takes place. Which means this is more a software and content solution than a hardware solution, despite all the fuss people make about the Beacons themselves.

Many events choose to use a dedicated Event App, as that is most likely to be in people’s hands during the event. In this case, MacWorld went with a unique alternative, partly in the interests of time. Given their start date, to create a new mobile app or a new version of the show’s mobile app and get it approved by the Apple App Store so it could be downloaded in time was problematic, so they chose to use Apple’s Passbook for a place where all the Clues, Welcome content, etc… would show up in response to the iBeacon signals at each of their four contest stations. One advantage they had was being an Apple themed show, almost their entire audience possessed iPhones, complete with Passbook pre-installed.

Android phones can be brought into the fold as well, although some of the complications involved make that a subject for another post. It remains a challenge for now (which MacWorld was able to sidestep) but that will diminish as a hurdle in years ahead as Bluetooth Low Energy, also called Bluetooth Smart, is available on a greater percentage of Android phones as well.

4. The Program and User Experience Design

Beyond the technical hurdles, there are the myriad of conceptual details to get right in designing an experience of this type. How hard to make it to find the stations, or decipher the clues, how rich to make the prizes, etc… all of these judgment calls are critical in this or any proximity based marketing program, and again, will trace back to your objectives.

How did they do at Macworld–here is my take on the good, the bad and the ugly:

Their contest was engaging, with lots of people trying it out, and it achieved their goal of showcasing the technology, in this case both iBeacon and Passbook, which is full of opportunities in its own right. Tucked away behind one of the signs, the small iBeacon and its power source were plugged unobtrusively into the wall.

Like lots of tech experiments, it didn’t always work. Beyond the known problems, like being sure Bluetooth was turned on and the right notification and locations settings were active, sometimes the Beacons themselves, which were calibrated to cover just the right area, failed to get their signals where they needed to be. Maybe it was just because of all the other devices in the neighborhood, and sometimes a phone restart made everything all right, but the project was not without its need for some tech support (and some forgiveness!). The QR codes themselves remain an acquired taste. While necessary for this implementation using Passbook, part of the elegance that draws some of us to iBeacon is the ability to have information magically appear on your screen based solely on where you are, with no scanning or tapping required. That was (by design) only used as part of this approach (for the clues themselves) with a QR scan required to point you (via Passbook) on to the next station. Ultimately, the MacWorld iBeacon program’s most telling long term impact may be in the way it speeded people’s progress through registration. Again, Paul Kent from IDG/MacWorld was thrilled with this aspect of the program:

“We are blown away by the numbers of people participating—we have taken minutes off of their registration time—they are walking by with their phones, the pass comes to the top–its what technology should be doing—seamlessly making things wonderful for people.”

As Event Producers continue to search out the best use cases for iBeacons at events, that kind of practical time saving and value increasing benefit may prove to be just as worthy, or even more worthy, of investment than the fun new tech bells and whistles.

In the words of Tim Perfitt, the main developer of the program at MacWorld

“Where the scavenger hunt is really a contrived type thing, as people try to figure out Beacons…the registration check in is really how events will use this.”

This is a guest post by Brian Duggan. He is a strategist working to help event producers, sponsors and new technologies to partner together for success in our new “cyber-physical” age. The Founder of Building Alliances, whose clients include Business Insider, Twitter, Eventbase & others, he can be followed on Twitter at @briand, @Beacon4Events or @ConferenceBites or connected to on LinkedIn here.