Summer is an excellent season for meetings, conferences, and events in Holland. Music festivals, sailing events, culinary experiences, and arts events add excitement and there are truly innovative meeting spaces and unique venues to delight participants.

Mention Holland and images of tulips, windmills, and canals come to mind but that is only part of the story. In the summer, when temperatures are a comfortable 17°-20°C, Holland offers a range of activities, festivals and other special events.

There are 12 provinces in The Netherlands. Amsterdam, Haarlem, and Edam are in North Holland, Maastricht is in Limburg, and Rotterdam, Gouda, and The Hague are in South Holland.  As Holland is a small country, groups can get around quickly to explore a variety of attractions.

The summer is the perfect time to explore Holland’s open air, “living museums”. These re-created villages showcase Holland’s traditional culture and lifestyle. Zuiderzeemuseum, Orvelte, Arnhem, and Zaanse Schans are a few examples of living museums. Some of them have facilities for meetings and events.

Some of Holland’s other must-see attractions include:

During the summer, there are activities, festivals and events to cater to every taste.

The Amsterdam Roots Festival kicks off the summer season with positive vibrations from sun destinations. Reggae, rhumba, salsa, zouk, and a variety of African music. That same weekend, Unlimited Carnival and Dunya Festival brings tropical fever to Rotterdam. There is even a Caribbean style jump-up parade. The International Chamber Music Festival in Utrecht, which features classical favorites, also ushers in the summer season.

Sensation Amsterdam, a dance event, takes place during the first weekend of July. In mid-July, Jazz legends perform at the North Sea Jazz Festival in Rotterdam. In August, Lowlands, which takes place in Biddinghuizenm, delights hip-Hop, rock and pop fans for 3 days.

Depending on group demographics, sensation electronic music, which originated in Holland, may be the perfect way to bring music to your own events.

Here is a creative way to bring music to your own events in Holland.

Vincent Van Gogh, Rembrandt and the Flemish artist Peter Paul Rubens are just a few of the artists of Dutch heritage who have left their mark on the world. Art lovers will be pleased by the fact that Holland has the highest density of art museums in the world. Many of them have meeting and event facilities. The Van Gogh Museum and Rembrandt House Museum are must-see attractions.

Other popular art museums to explore include Kröller-Müller Museum, a museum with a 25 hectare sculpture garden and Van Gogh masterpieces, Rijksmuseum, with works dating back to the Middle Ages, and the Sonnenborgh Museum & Observatory in Utrecht.

Hands-on painting and drawing workshops for beginners can be arranged at Vondelpark Atelier, Mauritshuis, which showcases Dutch and Flemish art, and Atelier Molenpand in Amsterdam.

The Dutch have had a seafaring tradition that dates many centuries back. As 20% of Holland is below sea level and 50% of the land is under a metre above sea level, there are many canals, rivers, and waterways to explore. River cruises, sailing, and houseboats are just a few options.

A number of sailing events take place in August including the Westland Floating Parade, Sneekweek, a large sailing event in Sneek, and Skûtsjesilen Sailing Championships, also in Sneek. In early September, the RSM MBA Regatta takes place in Medemblik. While groups are there, they can explore Kasteel Radboud.

Amsterdam has been regarded as the “cycling capital of the world” for decades. With its intricate network of bike paths, cycling is a unique way to explore a destination. There are a variety of routes offering opportunities to explore historical architecture, canals, lakes and wetlands, and historic villages.

A number of themed bike tours are available including a Van Gogh tour, tour of old Dutch cities, and Windmills and Pastures.

Bike and barge tours combine the best of land and water. Guided and self-guided tours are available in Amsterdam and many other locations including Utrecht, Rotterdam, and Groningen.

A cycling scavenger hunt or a bike rodeo would add a touch of fun for corporate groups. Groups can also take in cycling races in the summer including KOGA Slag om Norg and the  Arnhem-Veenendaal Classic in August. 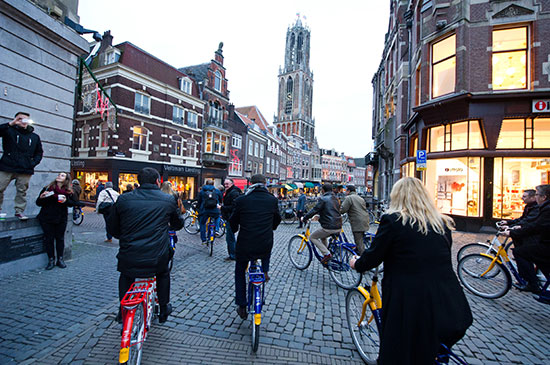 Summer Dutch dishes that Mr Holland has recommended include bitter balls (bread encrusted meat ragout), raw herring with onions, and gouda cheese. The Dutch Cheese Museum in Alkmaar showcases the history of cheesemaking, artifacts, and paintings. Groups can witness cheese trading, a tradition that dates back several centuries, at cheese markets in Edam or Gouda.

Foodfestival aan de Zaan is in early July. Early in August,  food trucks line up at NDSM Wharf for Amsterdam Kookt in August.

The Sloten Bier Festival takes place for the entire month of July. The National Beer Museum is also located in Alkmaar. Learn about beer making at the Heineken  Experience, an interactive beer museum.

The Origin Chocolate Event doesn’t take place until October but it’s worth a quick mention as it will delight chocoholics. For small meetings and events:

Meeting venues with event spaces that encourage team play include Swingbo Eventlab – Utrecht and The Playing Circle in Amsterdam.

Event venues on the beach include Sunrise Beach Club in Ekkersweijer, Nord Brabant,  SolBeach in Scheveningen, South Holland, and The Bing Beachclub in Hoek van holland, South Holland. Other outdoor event venues include Wantijpaviljoen in Dordrecht, Paviljoen Genneper Parken, a venue with extensive gardens in Eidenhove, Nord-Brabant, and DierenPark Amersfoort in Utrecht.

The Dutch have pioneered a number of unique meeting venue concepts.

For large meetings, conferences, and exhibitions:

There are a number of Dutch hotels that feature traditional and modern architecture used in innovative ways. Here are some examples:

In Holland groups can spend the night:

More Places to Stay in Holland

With 579 guest rooms Maritim Hotel Amsterdam, which is slated to open in 2018, will be one of Holland’s largest conference hotels and its tallest hotel. The largest conference rooms will accommodate 1,300 – 4,750 participants. There will also be 17 small meeting rooms. Plans are also underway for the Nhow Amsterdam RAI with 650 guest rooms to open in 2018. It will have a TV studio on the top floor, art gallery, and sculpture garden. It will be located at the  Amsterdam RAI complex, one of Holland’s largest convention and exhibition spaces.

There is much to make Holland an attractive destination in the summer months. Depending on their interests, groups can round out their itineraries with music festivals, art escapades, cycling, sailing, and culinary experiences. With unique event venues and places to stay, corporate groups will have many welcome surprises during their time in Holland.