Yesterday Twitter announced Hashtag pages. This is why you should be ecstatic about it. 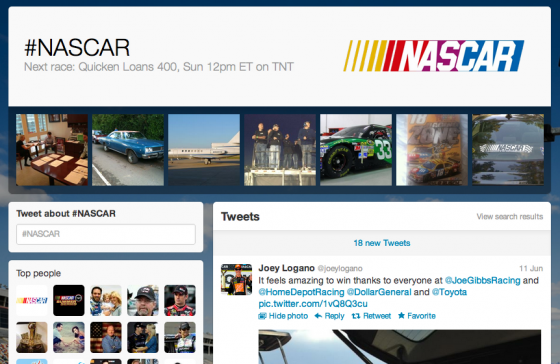 Twitter has a special bond with Events. Not only current events such as the Arab Spring, but also organized events such as meetings, festivals and conferences.

Hashtags are the key tool to make your event trackable and visible on Twitter. They were actually suggested by the inventor of BarCamps, one of the best translation of social offline.

In December Twitter launched a redesign which included new tools specifically targeted at events such as the Hashtag Button (see it live on our Event Manager Theme Demo).

News is that Twitter conceived a whole new way to display events, Hashtag Pages. They were announced through a TV commercial.

This is a big deal.

What Are Hashtag Pages

Hashtag pages categorize all the tweets, media and users about a specific event.

The first example is the #Nascar page.

There are few things worth noticing:

1) . The Nascar page does not display all the tweets with the #Nascar hashtags in them.

It looks like Tweets are selected by those managing the page and by some sort of technical filter.

Twitter is now giving event professionals the capability to moderate tweets and highlight only the most relevant ones. This is a giant leap in providing a quality display but also sparks the inevitable ‘censorship’ debate.

2) Hashtag pages such as Brand Pages display pictures in a neat way. The stream from Nascar is filled with pics.

Pictures are highlighted in a gallery at the top of the page.

This makes the whole experience of following an event online extremely pleasing. There are rumours that some livestreaming capability will pop up at some stage, but nothing confirmed yet.

3) A ‘Top people’ section has appeared on the left hand side displaying the top users talking about the event.

This a great move that gives administrators the power to highlight power users but also to gather the real influencers tweeting the event.

What Should You Do About It?

For the time being there is very little that can be done.

Twitter has proven to be very slow in rolling out features such as Brand Pages or Advertising to the wider user base.

It is fairly obvious that this news pretty much changes the way event professionals use Twitter at events.

It’s highly likely that the price tag attached to Hashtag Pages is going to carry a few digits, therefore not accessible to smaller or medium sized events.

What do you think about Hashtag pages?