Trade shows are an important part of our industry. So which are the top 10 exhibition venues around the world?

Not surprisingly, the biggest dedicated exhibition venues are located in the biggest trading nations – Germany, China and the US. However, a staggering 70% of the top 10 venues by square metre size are actually located in Europe with two in China and, surprisingly, only one in the Unites States.

A Short History of Exhibitions

While meetings and conferences have been taking place both formally and informally since time immemorial, exhibitions span a shorter arc of history. The Great Exhibition or, to give it its full name “The Great Exhibition of the Works of Industry of all Nations” took place in Hyde Park London in 1851 and is generally regarded as the primogenitor of the modern Expo – the latest edition of which took place last year in Milano, Italy at the Fiera Milano.

To stage the Great Exhibition in 1851 a temporary structure needed to be built. Called the Crystal Palace or The Great Shalimar, the venue itself became as famous as the exhibition it hosted and was later re-constructed at a permanent site in London, only to be destroyed by fire in 1936.

E is for… Events?

Readers of EventMB cover the full spectrum of what’s often referred to as the MICE industry – meetings, incentives, conferences and events. There is debate as to whether the “E” of the acronym stands for events or exhibitions. Personally I prefer “Events” as it’s a more comprehensive category header and, anyway, an exhibition is an event so it logically fits under it as a sub-set.

Exhibitions are also part of corporate meetings and association conferences and play a vital role in the business and financial models which underpin their success. As eventprofs we are immersed in the world of exhibitions and need to be up-to-date on where in the world the best trade show venues are located.

Here are the biggest exhibition venues today that continue the inspiring legacy and tradition started by The Great Exhibition to bring people together from all over the world around achievement and endeavor, commerce and culture. 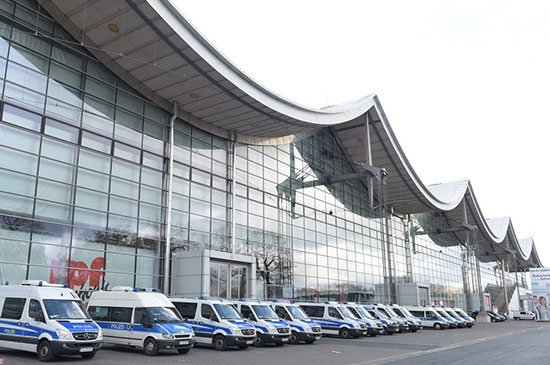 “Messegelande” is the German word for “Fairground” and the Hannover Fair dates from 1947 when the British military government in post-war occupied Germany wanted to hold a trade fair to rebuild commerce and trade in the country. Fully integrated with the city’s public transport infrastructure since 1949, the Hannover Fair is a case-book example of best practice in Exhibition venue design and operation. It underwent extensive re-modelling in preparation for Expo 2000. Built in the shape of a four-leaf clover, this highly iconic exhibition venue actually claims to be the biggest in the world at 500,000 square metres, although 100,000 square metres of available space is actually outdoors. Dating from 2011, this is a statement venue, announcing that China is taking its place at the table of global commerce and culture. Most eventprofs are familiar with the Messe in Frankfurt as it has hosted IMEX, one of our industry’s flagship shows, for over 10 years. We’re also familiar with its humongous size (5 minute shuttle ride from entrance to Exhibition Hall) and know that, despite IMEXs ever-expanding footprint within the Messe, we still only occupy a tiny part of the entire complex! With the city’s hyper global air connectivity and the convenience of a rail connection to within 500m of the facility, the Frankfurt Messe is destined to be hugely popular for global fairs. Next in size is the Fiera Milano where Expo 2015 took place drawing 20 million visitors to the city. Opened just over 10 years ago, the complex is the work of Italian born architect, Massimiliano Fuksas, who has undertaken signature projects all over the world including the stunning new terminal at Shenzhen Airport in China. There are 8 pavilions with a total surface space of 345,000 square metres. 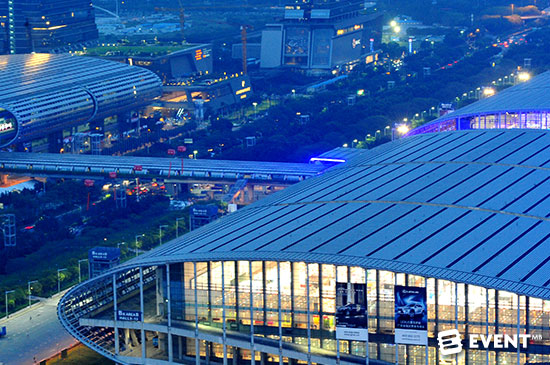 The Canton Fair at Guangzhou has been held since 1957 and the venue has steadily grown to almost 340,000 square metres of indoor exhibition space across three distinct areas. The facility hosts the spring and autumn sessions of the world renown Canton Fair which, annually, attracts well over 150,000 trade visitors from over 200 countries to 55,000 individual booths representing well over a quarter of a billion in contracted business. Now that’s scale! Next in size is the international trade fair and exhibition centre located in Cologne (Koln) in Northern Germany. This facility also hosts 2,000 meetings and conferences and about major 75 trade fairs each year including Anuga, the most important global exhibition for all things concerning food. While the current campus is contemporary in design, fairs have been held at the site since 1922. We’re back in Germany again for number 7 on the global list of exhibition centres, and this time it’s Dusseldorf. Here there are 262,000 square metres of space distributed over 19 exhibition halls with additional access to 43,000 square metres of useable outdoor space. Messe Dusseldorf is particularly good on digital with its own comprehensive app and several social media channels in daily use. 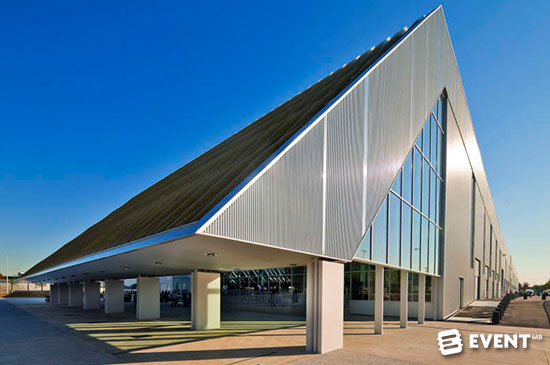 Built between 1980 and 1992, Paris Nord Villepinte, one of 10 conference, exhibition and entertainment venues in the Paris metropolitan area under the management of Viparis, is the 8th biggest in the world. It typically hosts a variety of events including both public exhibitions and trade shows including the famous Salon du Cheval, a 9 day trade event aimed at the bloodstock and equestrian industry. McCormick Place Chicago is another venue well known to “older” eventprofs as, for many years, it hosted the primary US based trade show for meetings and incentives known colloquially as IT&ME (it was actually called The Motivation Show and still runs under that name albeit with little focus on “incentive travel” now). McCormick has expanded greatly over the years and is now a fully integrated campus that includes accommodation, retail and a transport hub. It is the largest such facility in the US spread over 4 areas, linked by pedestrian promenades and sky bridges. There are two exhibition venues in Barcelona under the overall management of Fira Barcelona, the Gran Via, at 240,000 square metres, being the bigger of the two. Designed by the Japanese architect Toyo Ito, winner of the Pritzker prize, it contains 240,000 square metres of exhibition floor space, and has 8 interconnected halls and 45 restaurants. It is located close to Barcelona Airport and as the host location for IBTMWorld, is well known to eventprofs.

The “E” in MICE may be events but that doesn’t diminish the importance of exhibitions within our broader industry. Exhibitions have a proud history dating from the mid nineteenth century as global showcases for human achievement and endeavor and as powerful magnets attracting consumers and business alike around topics and themes of common interest. These 10 exhibition venues are ground-breaking, iconic structures hosting millions of visitors each year and bringing huge economic benefit to the destinations in which they are situated.